Toronto, ON’s metalcore quartet Where Giants Once Stood will be embarking on a two week Summer Rumble Tour of Ontario, Quebec and Nova Scotia with Signifier kicking off August 8th in Belleville, ON. The tour is in support of their upcoming sophomore EP ‘Live Above’ produced by Jon Howard of Threat Signal and due out on September 2nd to follow up last year’s debut EP ‘The Changing’. Their new video for their first single ‘Living In Security’ was recently unleashed (link below) and was directed by Logan Swinkels of Logan Lights Creative. The video is an anthem for taking control of your own destiny, and deconstructs small-town complacency to showcase the band’s most creatively ambitious material to date. 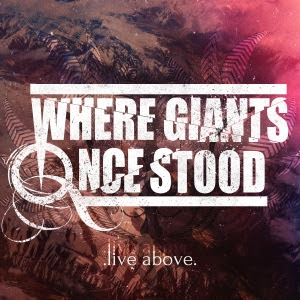 Track Listing – Where Giants Once Stood – Live Above

Due for release September 2, 2014, Where Giants Once Stood’s new EP ‘Live Above’ is the natural successor to 2013’s The Changing EP, which tore onto the iTunes metal charts in July 2013 with a debut at no.2, earning critical praise, sponsorship from Ernie Ball and a place on SoundSHOCK’s “Best of 2013”. The four new tracks on this EP take Where Giants Once Stood’s signature sound of scorching guitar work, “assaultive underbeats” and“drill-sergeant vocals” to soaring new heights, thanks to incendiary production by Jon Howard of Threat Signal.

“Since we started up last year, we’ve grown so much as musicians, as songwriters and as performers”, reveals lead guitarist Jordan Turnbull. “We knew the sound of this new material had to be something special to reflect that, and Jon Howard’s production has really taken the Giants sound to the next level!”

While W.G.O.S. have been winning fans on home turf with their frenetic live shows that have seen them share the stage with bands such as Chelsea Grin and Born of Osiris, social media is equally important to the band’s ethos as they use their online presence to connect with metal fans across the globe. Their stellar YouTube channel featuring everything from interviews and lyric videos to exclusive cover songs and blistering instrumental playthroughs, while their Instagram and Twitter feeds provide to-the-minute studio and live updates. Guitarist Scott Major explains, “Whether it’s keeping up with us on tour through Twitter or rocking with us on YouTube, we want you to get the full Giants experience wherever you are!”